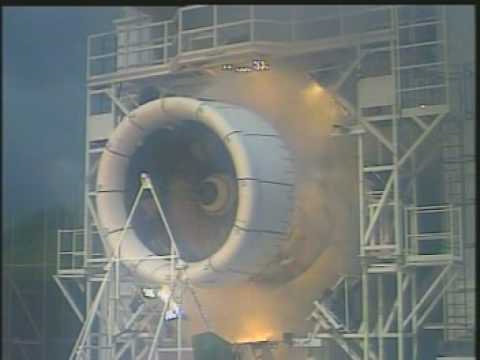 The engine blade-off test is performed to make sure that the engine can survive a fan. compressor or turbine blade breaking off within the engine, without fragments being ejected through the outside enclosure of the engine.  This is a containment requirement.

A fan blade is deliberately detached during the test using an explosive device while the engine is running at maximum thrust. The test does not require that the engine continues to operate after the blade failure.

For an actual flight occurrence, the engine would be shut down. There is no means of stopping the engine from continuing to rotate while there is sufficient airflow through the fan section to drive the engine. So it would continue to “windmill” without producing any thrust. The rotating imbalance vibration would persist under these conditions.

See: Exciting Vibrations: The Role of Testing in an Era of Supercomputers and Uncertainties

Go to 27:00 minute mark and watch for about six minutes

Fatigue accounts for a significant number of turbine and compressor blade failures and is promoted by repeated application of fluctuating stresses. Stress levels are typically much lower than the tensile stress of the material. Common causes of vibration in compressor blades include stator passing frequency wakes, rotating stall, surge, choke, inlet distortion, and blade flutter. In the turbine section, airfoils have to function not only in a severe vibratory environment, but also under hostile conditions of high temperature, corrosion, creep, and thermomechanical fatigue.   Reference

This is a work-in-progress…

Here are the slides:

Unit 7   Synthesizing a Time History to Satisfy a PSD Specification

I am trying to collect all my presentations. This is a work-in-progress…

There is a need to derive a power spectral density (PSD) envelope for nonstationary acceleration time histories, including launch vehicle data, so that components can be designed and tested accordingly.

The first method divides the accelerometer data into segments which are idealized as “piecewise stationary” in terms of their respective PSDs. A maximum envelope is then drawn for the superposition of segment PSDs. This method initially requires no assumptions about the response characteristics of the test item, but vibration response spectra may used for peak clipping as shown in the example.

The following two methods apply the time history as a base input to a single-degree-of-freedom system with variable natural frequency and amplification factors. The response of each system is then calculated. Upper and lower estimates of the amplification factor can be used to cover uncertainty.

The first of this pair is the energy response spectrum (ERS), which gives energy/mass vs. natural frequency, as calculated from the relative response parameters.

The final method is the fatigue damage spectrum (FDS), which gives a Miners-type relative fatigue damage index vs. natural frequency based on the response and an assumed fatigue exponent, or upper and lower estimates of the exponent.

The enveloping for each of the response spectra methods is then justified using a comparison of candidate PSD spectra with the measured time history spectra. The PSD envelope can be optimized by choosing the one with the least overall level which still envelops the accelerometer data spectra, or which minimizes the response spectra error.

This paper presents the results of the three methods for an actual flight accelerometer record. Guidelines are given for the application of each method to nonstationary data. The method can be extended to other scenarios, including transportation vibration.

Consider a component mounted on a structure where the base input is measured by an adjacent accelerometer on the structure. An envelope power spectral density (PSD) is needed so that component design and test levels can be derived, with the appropriate added statistical uncertainty margin.

Assume that the base input has been measured over a series of accelerometer time histories. This could be the case for an automobile driven at different speeds over different road conditions, for example.

The envelope PSD can be derived using fatigue damage spectra as shown in:  FDS_PSD_multiple.pdf

The C++ programs are:

Here is an alternate program that allows for repetition for a given time history file.  This is useful, for example, if a short time duration was measured to represent a longer service duration.

Now assume that there are three measured acceleration time histories where the repetition number is 10, 50 and 100, respectively.

The input file format would be:

Substitute your own file names and multipliers accordingly.

Options for including mean stress have been added to the Vibrationdata GUI package’s Fatigue Toolbox, for both stress time histories and PSDs.

The following scripts calculate the A, B, C, P coefficients to model a set of SN curves with varying R values: sin_curve_fit_R.zip

sn_curve_fit_R.m is the main script.

The equations are given in: sn_curvefit_equation.pdf

I recently sent out a survey asking engineers which fatigue methods that they use.

If anyone else would like to reply, then please send me an Email. I will then update the survey.

Acoustic Fatigue of a Plate

This section addresses parts that can be classified non-fracture critical because of large structural margins and other considerations that make failure from a pre-existing flaw extremely unlikely.

a. For a part to be classified low risk, it shall be constructed from a commercially available material procured to an aerospace standard or equivalent.

b. Aluminum parts shall not be loaded in the short transverse direction if this dimension is greater than 7.62 cm (3 in).

c. A part whose failure directly results in a catastrophic hazard shall be excluded from being classified low risk, except when the total (unconcentrated) stresses in the part at limit load are less than 30 percent of the ultimate strength for the material used and requirements (1) through (3) and either (4) or (5) are met.

d.  If there is a change in loads, parts classified as low risk shall be re-evaluated to ensure
that net section stresses remain below 30 percent of ultimate strength.

The peak stress can also be compared to the endurance limit, but some materials do not have identified endurance limits.  Here is a rule-of-thumb for these cases from NASA-HDBK-5010.

Note that R=-1 for fully reversed stress with zero mean stress.  For this case:  Smax < Ftu/6

This formula has some limitations and needs further research.