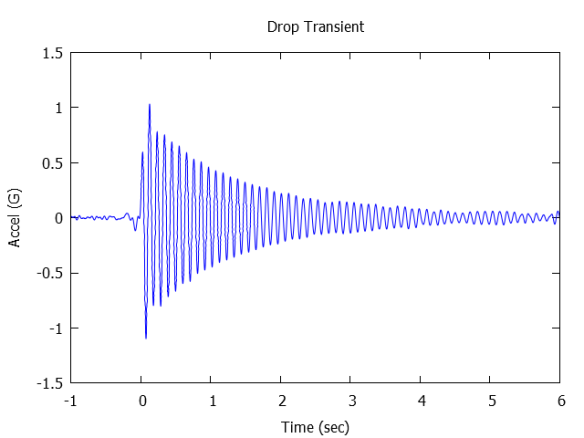 Gnuplot is a portable command-line driven graphing utility for Linux, OS/2, MS Windows, OSX, VMS, and many other platforms. The source code is copyrighted but freely distributed (i.e., you don’t have to pay for it). It was originally created to allow scientists and students to visualize mathematical functions and data interactively, but has grown to support many non-interactive uses such as web scripting

Gnuplot can be downloaded from previous link or from: softpedia gnuplot

Here is an example for plotting the time history shown above using the following files:

Here is an example for generating a graph with two subplots using the multiplot command.

Here is an alternate example that plots the two curves in separate windows:  plot_drop_2.plt

The follow command is then entered into the gnuplot window:

The drop_plot.plt file also generates a corresponding png file as shown at the beginning of this post.

The  above plot was made using Gnuplot Version 4.6 patchlevel 3.

The png file can be accessed by other applications but may require the following command first depending on the application, operating system, etc.

Here is an example for plotting a power spectral density in log-log format, with some manually added tics.

Here is an example for plotting a shock response spectrum with two curves and a legend.

Here is an example for calling gnuplot from within a Fortran program running in Ubuntu:  fortran_gnuplot_demo.f

The key code line is:

I am relearning Fortran, including the features which have been added since I last used it some twenty years ago.

Here is a method for compling a sample Fortran program NAME.F.  This method checks for memory leaks.

Cross-correlation is a measure of similarity of two waveforms as a function of a time-lag applied to one of them.

Autocorrelation is the cross-correlation of a signal with itself. It is a time domain analysis useful for determining the periodicity or repeating patterns of a signal.

Here are two Matlab scripts which perform correlation analysis.  They do not require the Matlab Signal toolbox.

Here is a paper:  autocorrelation.pdf

Here is a set of Fortran programs:

Consider a component which is to be subjected to a shock test using a shaker table.

The test specification for this example is a Shock Response Spectrum (SRS).

The control computer must synthesize a time history for the test.  The typical method is via a series of wavelets.

The Matlab scripts in wavelet_synth.zip demonstrate this process.

The main script is:  wavelet_synth.m

Here is a Fortran version:  wavelet_synth.f

Here is a script that uses a series of sinusoids:  srs_sine_syn.zip 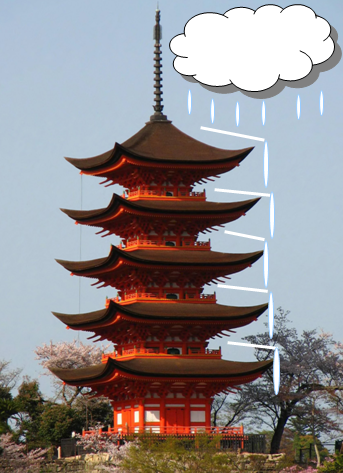 Endo & Matsuishi (1968) developed the Rainflow Counting method by relating stress reversal cycles to streams of rainwater flowing down a Pagoda.  This method is very useful for fatigue analysis.

The rainflow method allows the application of Miner’s rule in order to assess the fatigue life of a structure subject to complex loading.

The resulting tabular data is sometimes referred to as a spectra.

rainflow bins.m is a Matlab script that performs rainflow cycle counting on a time history per ASTM E 1049-85 (2005). Its supporting function is: progressbar.m

Rainflow counting is also included in the following GUI package.

The specific method is ASTM E 1049-85, section 5.4.4, Rainflow Counting. The results of this method for an example are shown in Figure 6 of the ASTM document.

A Fortran version is:  RAINFLOW.F

Here is a version which outputs the results in a NASGRO long block format:

These scripts arbit_rainflow.zip calculate the response of a single-degree-of-freedom system to an arbitrary base input time history.

The scripts also have an option for rainflow cycle counting.

arbit_rainflow.m is the main script.

Here is a script for calculating a damage index from the rainflow results. It is meant for relative comparisons only. fatigue_damage_sum.m

A Comparison of the Consecutive Peak and Rainflow Cycle Counting Methods for Cumulative Damage Calculation: Rayleigh_rainflow_study.pdf

– Tom Irvine
Join me at:  LinkedIn

The following Matlab scripts calculate the Fourier transform of a time history: fourier.zip

The main script is: fourier.m

A Fortran version is given at: FOURIER.F

A Fast Fourier version is: FFT.F

Please let me know if you have any questions.

The Matlab scripts in PSD.zip calculate the power spectral density function for a time history.

The main script is:  PSD.m

A Fortran power spectral density program is given at:  PSD.F

Please let me know if you have any questions.

The most widely used algorithm for the Shock Response Spectrum (SRS) calculation for base excitation is the ramp invariant digital recursive filtering relationship given in:

David O. Smallwood, An Improved Recursive Formula for Calculating Shock Response Spectra, Shock and Vibration Bulletin, No. 51, May 1981.  The link is:  DS_SRS1.pdf

Smallwood duly gave the resulting filtering coefficients in his paper, but he omitted the derivation details for brevity.

This omission is typical for papers published in journals and conference proceedings, given that derivations may require dozens of steps.

The following paper fills in the details:  ramp_invariant_base.pdf

An Introduction to the Shock Response Spectrum:  srs_intr.pdf

Additional papers are given at: Vibrationdata SRS

Here is a Matlab script for the SRS calculation of an arbitrary base input pulse: srs.m

Here is a Matlab SRS function which call be called by main scripts:  srs_function.m

Here is a Matlab script for the time history response of a specific SDOF system to an arbitrary pulse: arbit.zip

Here is a Matlab script for the SRS of a half-sine pulse & its supporting function:  halfsine.m  & time_calc.m

A Fortran SRS program is given at:  QSRS.F

– Tom Irvine
Join me at:  LinkedIn

Here is a Fortran program which solves a system of linear equations: LIN_EQ.F

It is compiled via:

A version written in C/C++ is given at:  linear_eq.cpp

It is compiled via:

Message Passing Interface (MPI) is a portable library of subprograms which can be used to facilitate parallel computing.

The MPI subprograms can be called from C and Fortran programs.

Parallel computing enables large scale numerical problems to be solved in a timely manner.  It can be performed on a multi-core PC, or using several networked PCs on a cluster or grid.

The key is to separate large problems into smaller ones.  The calculations are then carried out simultaneously.

The MPI subprograms regulate the communication and synchronization between the various CPUs and memory locations.

MPI can be downloaded from:
http://www.mcs.anl.gov/research/projects/mpich2/

The best installation method is to build the source code using the directions in:
http://www.mcs.anl.gov/research/projects/mpich2/documentation/files/mpich2-1.4.1-installguide.pdf

This can be done under Cygwin or Linux.

Download the greetings.c program to the same folder which contains mpicc.

Also find and copy libmpich.a into this same folder.

Compile the program via:

Then run the program via:

Grant persmission to run under firewalls if so prompted by pop-up windows.

The program can also be run as:

In the above example, four processors were used.